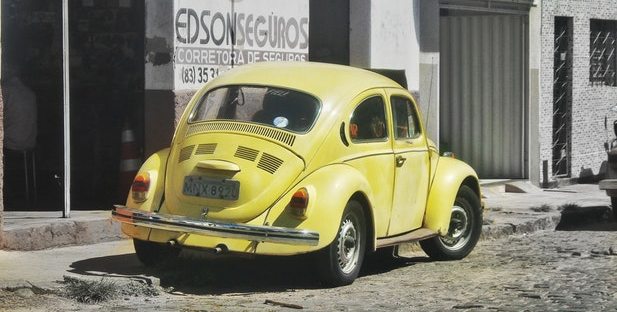 an excerpt from my short story;

Wind swept past the opened windows of the pale-yellow Volkswagen bug as it sped along the highway. Meanwhile, Iggy Pop sang a duet with me; he in the back speakers, myself behind the wheel. I didn’t know all the words, but every now and then I’d yell out “Lust for life!”, maybe throw in the odd phrase or two – call it good. Grass waved us by – tall grass, green grass. It was all you could see on either side of the road. Kansas.
Four days of this was about all a person could stand. Sure, you could get through it faster, but then you miss the side-shows and all the little attractions which make life worth living. A couple hours and I’d be in Lawrence, then I’d get all the time in the world to sit back and walk the straight-n-narrow with my family. I’d walk through the door, kiss my mom, say hi to the kids, unpack my bible and say grace – but for now, I’d like to see a thing or two.
The breeze and the grass seemed to exist just to belie the heat of the sun as it pressed down on me. I had undone the top few buttons of my collar shortly after dawn and, despite my best efforts, the once starched white cloth of the collar and cuffs had now become discolored with sweat and dirt from the road. As the sweat ran down my face it burned like thick aftershave. I felt like an insect under a lamp and a magnifying glass.

Yesterday was Wichita. Fifty dollars and some rum found me a couple hussies and a hotel. The shower was broken so I swam in the pool around 9am with a few floating bottles and plastic bags. It was refreshing but a little on the nippy side. While I was scrubbing myself, I saw a little kid come out on the deck a floor above my room. He was cute, brown haired with fat little cheeks and nice, straight teeth. I waved at him and he smiled. He was playing with a top.
He spun it a few times, then frowned heavily as it hit a bump on the railing and fell off. “Dammit!” his fat little cheeks pooched out as he cussed.
From inside his room a woman’s voice rang out, “Watch your mouth!”
“Sor-wy mommy” he looked distraught.
I got out of the pool and went to grab the top. Picking it up, I tossed it to him. He picked it up and smiled widely, his eyes gleaming.
“Thank you!” he said, then waddled off.
I went back to my room and found the hussies smoking my last cigarette. I kicked them out and got dressed – but let them keep the cigarette. I bought a new pack in the lobby and tipped the clerk.
Sometimes it’s just worth knowing that you have the power to change the course of somebody’s day, even a little.

The trees swept by and the song switched. Like I’d said, I’d been on the road for a couple days on the way home from the university. Well, maybe I hadn’t mentioned the University. In truth, it was already the fourth day of my summer break and I was going to be spending the next three weeks at my mother’s house. I could hear her now: “Please, Gary, no drinking around your siblings. No smoking. No gambling. No prostitutes. No loose women. No tight women – you gotta’ keep your mind on school son – even during the break – that’s when you’re supposed to refocus.” Why bother?

Truth be told, if most men were studs, I’d be a stallion. If I were taken to market, you’d bet I’d be the prime rib, the choice cut, butcher’s favorite; everybody would want a piece. When I hit the job market I am going to take it by storm. Everybody is going to know about Gary Wilman and his revolutionary approach to Biomechanics – Maybe.
Truth really be told, if I were more interested in studying and less interested in Christina Holis I’d probably be more likely to make that previous statement a reality. Blonde half the time, brunette the other half, Christina liked to follow the trends. She’d been passed around the campus like a favorite bong and I’d never gotten a hit. Probably, I never would. We dated, briefly, and I looked too far into her reputation. Apparently, she doesn’t like the idea of being promiscuous on a third date. Should’ve tried the fourth.
Now, I see her in the halls and in the quad and all I can think of is, “how could I fix this?” I know I can fix this, somehow.

Mom’s house wasn’t too bad, really – if you got used to it. It was a Victorian masterpiece, once upon a time. Now, the ceiling plaster is cracked and peeling, the pipes would freeze constantly, the boiler is a wreck, and the doors only shut if you lift them. For the next few weeks it would be her, Mark, Mary, and myself all cooped up on a little Kansas farm together just outside Lawrence. Brother Mark was something special. Little bastard. Sadistic, straight A’s, and probably what you’d call a good boy. He fit in at school pretty-well. Sister Mary’s a sweet girl mostly, but then again, I don’t really know her much. She’s much younger than I am. All of us had different fathers. None of them stuck around. Call it dealer’s choice – the Dealers all chose to leave. Honestly though, I can’t blame them, men aren’t meant to be tied down.
The car was getting low on gas, so I began to keep an eye out for a station. While I looked, I packed my cigarettes and pressed the lighter button. The track changed again, this time the Ozark Mountain Daredevils began to play. Using my pack as a harmonica, I played along with them, trying to ‘raise a little hell’, then pulled out a butt with my lips.
The simple fact is, my entire life, I’ve been alone. Nothing has ever been enough. Nothing. I tucked the pack beneath one leg and reached down to catch the lighter – I just want to be happy – it popped just as I hit a small pothole. I fumbled it, catching it in my palm. The hot metal seared my flesh, blackening it and began making a sickening wet bubble of a welt the size of a quarter. As it burned my hand I jerked, and the car lurched with me. I tried to wrestle with the wheel, but it was too late. The car sped into the ditch, plowing through the side of the road in a gigantic cloud of dirt.

The cloud had disappeared – nearly, by the time that I had come to. I was still strapped to my seat, blood dripping from my forehead onto the steering wheel beneath me. The track had changed again, and David Bowie was singing Five Years. As he told me he needed people, the strap slipped from my chest, sliding up under my chin. Shit.
Something was pinning my left arm to the door, and the other wouldn’t reach far enough to free me. I just sat there, pawing at my neck like a puppy in a bag as I slowly suffocated, the music softly warbling in the background, gently and quietly fading as I did the same. I felt my eyes bulge – my tongue felt too large for my mouth. I’m going to die...

This story will be submitted in full with the goal of being published this year. When it is, I’ll share the link so that you can read the whole story.

View all posts by worleyskyler

“Because It Was Raining”, and any other publications which may be produced on this website are the sole property of Skyler Worley.

I love what I do, and I am so thankful for the opportunity to share my world with you. Please feel free to send me comments or messages, and I will try to keep you all up to date on the latest projects and publications!